Indignities mount once you pass 40.

One is that you increasingly feel like you’ve entered the Age of Flatulence. Suddenly your aging insides make themselves known more to those on the outside. Another is when someone significantly younger—who doesn’t even qualify for the AARP coffee discount at Denny’s—kvetches about how old he is.

Which is why I wanted to shout out to stand-up comic Matt Kazam: “Hey junior—don’t get your diaper in a twist.” Which isn’t to say that I wasn’t amused, by and large, by Kazam’s new generation-gap act, called 40 Is Not the New 20, at the Riviera Comedy Club.

Beyond deserving the subtitle “No Shit, Sherlock,” this “show” is a triumph of branding. Lending it a title suggests a theater piece. In fact, it doesn’t even offer the nominal theatricality of stand-up-centric Defending the Caveman, which at least incorporates video elements, a modest set and a consistent narrative thread into the mix, elevating it to Stand-up-Plus.

And Kazam was beaten to this things-ain’t-what-they-used-to-be observational shtick locally by Tom Green, whose periodic Hard Rock stand-up mines similar themes—sans the packaging.

Yet Kazam is a funny, likable 45-year-old with whom to spend 75 minutes of gripe-and-grin comedy. “Start taking notes, twenty-somethings,” he tells the young-’uns in the crowd. You’ve heard most of it:

Kids are spoiled (his childhood diversion of cheap-o View-Masters and Etch A Sketch vs. the home-entertainment-stocked minivans that “look like the Playboy Mansion”); gloriously cheesy TV (The Dukes of Hazzard and Fantasy Island) vs. cringe-worthy cheesy TV (the Kardashians); kids’ micro-managed “play dates” and moms who walk their kids on a leash at the mall; Internet dating (“women lie online—there are Muslim women on J-Date”); the silliness of political correctness; and the effectiveness of physical discipline (a sensitive topic, given headlines coming out of the NFL, prompting this disclaimer: “Not sayin’ it’s right. Just sayin’ it happened”).

Proving that this is thematic in only the loosest sense, Kazam often goes amusingly off-topic, as when he riffs on having sweaty sex and his own Jewish/Iranian background (“I have to throw rocks at myself”).

And yes—much time and comic complaining is spent on the downhill slide of the post-40 human body and the humiliations thereof. (C’mon—you didn’t really think you’d get out of this show without touching on that most intimate of doctor/male patient encounters—the prostate exam.)

Joke-punch-line setups are clever, even if the material is well-trod, and while some comedians base their delivery on aggressiveness and even challenging the audience, Kazam is an apple-shaped cuddle-bear with a nonthreatening manner that makes it all go down easily and entertainingly.

As if to validate the generational divide as the theme, during a bit on his mother’s feminine hygiene habits at a recent show, Kazam was interrupted by a young lady who requested to know what he meant by “the Pouch.” Delicately—to avoid embarrassing her—he explained, passing up the opportunity to descend into ridicule-comedy.

Which confirms that this dude is not a douchebag. 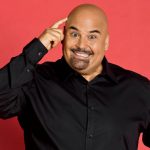 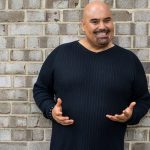